Showing posts from December, 2005
Show all

I'm working at a company that doesn't have much of a reason to exist, making mediocre products that my customers dislike more with each passing iteration, working on a new product that will either fail outright or never be used.

Despite the above, I have a rough time relaxing this week...this car fever has me in its grip for two reasons--I've always wanted a BMW, but I love my MINI. I don't love it more than I'd love being out of debt and in secure financial shape.

I'm beating-up myself for not doing things..things I promised myself I'd do this time off: selling some stuff on ebay, organizing my finances, exercising, relaxing, reading. I've pretty much done none of it.

:-) Every vacation is like this...it takes me until a certain day to 'detox' from my workaholism, and then I can finally relax.

At my darling's insistence, I went over to our doctor today to get my toe looked at; over Christmas, I noticed my middle toe on my left foot was ingrown on the right side. Today I got it removed, feeling very little pain thanks to some lidocaine.

The rest of the day, I convalesced watching season 5 of "Buffy the Vampire Slayer," my most excellent Christmas gift from Bella:

Also, I have a new cellphone...Decided that I wasn't using the 450 anytime + 5000 night/weekend package I had from Cingular, so I went the same route Bella did with Virgin Mobile. $20 for a phone, then prepaid increments as needed. :-) It'll be nice to not have that $50 each month.

No news on an E30 BMW...looking at this one. Got some pics from the owner and seems nice..
Post a Comment
Read more 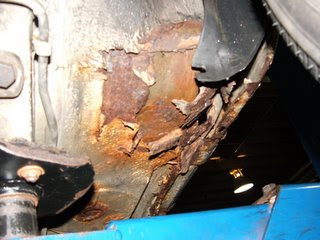 So, 9am this morning found me at Beechmont Toyota, looking at a 1984 318i with 173,000 miles on it. Yes, this car was made when I was in Kindergarten, here I was, trying to decide how much rust was acceptable on my new "project car" / Daily driver.

Answer: Not this much. No way.

Surprisingly, giving the age of the car, it fired-up smartly and settled into a thrumming idle, and the transmission was still buttery smooth, but the rest was a raft of problems--rust throughout (more on that later), questionable electics, musty smell in the cabin, bad seats, cracked dash, and missing surrounds behind the lights in the engine bay.

After a 30 minute test drive (yep...the suspension is shot...oh, why is the temper…
Post a Comment
Read more

Result of Quiz :: Your Harry Potter Alter Ego Is...?

You scored as Albus Dumbledore. Strong and powerful you admirably defend your world and your charges against those who would seek to harm them. However sometimes you can fail to do what you must because you care too much to cause suffering.

My new plan to take over the world.... 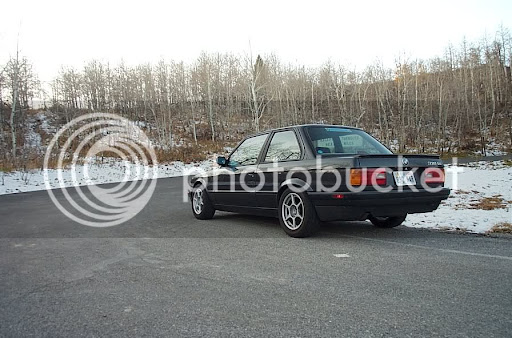 Sell the mini, keep the change, and buy one of these babies:

Sickness: Apparently, I've given whatever I had to everyone in my area. Germs 1, Humans nil.


something to commute in
reliable as dirt
good for going to Lowes, getting firewood, etc.
runs on regular gas
easy to work on
decent mileage (25 mpg)


I'd probably want a 2wd model, though...and they'd be iffy in winter driving. Could get some snows for it + sandbags, though.

One thing though...because they hold their value so well, you just don't find them under $10k.
Post a Comment
Read more

Does this make me a thief? A cheat? Immoral?

Sometimes I wish I could juggle...

December 21, 2005
...that way I could get through meetings where I want to throttle my PM, keeping both hands as busy as possible.
Post a Comment
Read more

December 20, 2005
Ah, the glorious cold virus...it's been with us for millenia and for the last 3 or 4 days, it's been with me. For the past couple of days, I haven't been able to talk (and all the people rejoiced...)

Biggest, bombshell news of the past week is the revelation that the 5-speed British Midlands transmission in the 2002-2004 Minis is a ticking timebomb--after a certain amount of time the gearbox will fail, resulting in a $3-4k repair. The problem seems to be the gearbox was engineered for England, where it's never much below 20 degrees F. In America we routinely see 0 degrees F and below.

Net of it all...Whitney and I are weighing selling the MINI, paying off the Oldsmobile, and getting something cheaper and more reliable.

Travelogue along the alaskan highway...

December 16, 2005
Managers are like gamecocks: More than two in a room at once, and somebody dies.
Be sure to begin each lie with the adverb: "Truthfully".
Arrive whenever you want, then derail the meeting by asking for an update
Accountability? Hell, I'd settle for competence...

On (almost) making a fire

December 15, 2005
Let me give you the conclusion: The logs never caught, the kindling ashes litter the bottom of the wet fireplace, and the house reeks of smoke.

Yes, I tried to make a fire tonight, and I failed.

My house has what's known as a 'built-in,' a fireplace that is basically an afterthought. Lacking a chimney, it's a triangular wart, occupying the place my Lay-Z-Boy should rightfully go.

Whitney has a cold, so I thought I'd build a fire and tend to her as she reposed on the couch. Lacking anything to use for firewood aside from our dining room set, I bought kindling at Lowe's and wood at Kroger, for a total of $10.

Arriving home, I set an initial fire only to find the flue wasn't open wide enough. The house filling with smoke, I doused the nascent fire with water, pushed the flue open with my fire tongs and started out again, but no matter how hard I tried, I never could get a good-sized log to catch fire.

On blogging, comments, and a cool site for air travellers

December 12, 2005
Ah, I yearn for my firebrand, idealogue days, when being a Republican didn't mean you parrotted everything that Ernie Fletcher & George Bush said. The days when I could hold my head high and say how much the democrats were ruining my state and my country.

I ask myself why this is, and I return to what I thought in 2004: Conservatives can stomach a Liberal leader, but Liberals can't stand a conservative, especially one as hapless as Bush. Why oh why didn't we elect John McCain?

Furthermore, while I'm ranting, can amend the consitution so that the children of former presidents CANNOT be president? On top of heavy-handed policies, unilateralism, we don't need to be accused of nepotism.

I'm toying with the idea of enabling comments. I have several readers these days, and would enjoy what they think, but I can't quite …
Post a Comment
Read more

December 09, 2005
I made a resolution that I wouldn't blog about my complaints about work, but that meant I stopped blogging altogether.

quote of the day

Tomorrow's basically a freebee for the company...

Work's been insane this week as we tried to bridge a release across Thanksgiving. We left last Wednesday thinking we'd release on the following monday. Didn't happen.
Post a Comment
Read more
More posts